Exciting Times In Serie A?

The country of Italy is gearing up for one of the most exciting Serie A seasons for a very long time. The signing of Cristiano Ronaldo has Italian football fans in a spin. He was spearhead Juventus’ charge for supremacy and Champions League glory. However, Napoli, Inter, Lazio, Roma and AC Milan are building strong teams below and we could be gearing up for a huge battle for supremacy in Italy. There are other strong competitors in the league as well as the sides battling against relegation and Serie A is gearing up to be a tight, exciting battle at both ends of the table.

The title battle will be strong with the big 6 all having a belief they can win the league. Juventus will be overwhelming favourites to retain the title and adding Cristiano Ronaldo only enhances their chances. Max Allegri has a dangerous team and he will want the title but also a Champions League crown to add to his glittering spell in charge of Juventus. However, last season’s runners up Napoli will be back with a vengeance after narrowly missing out on the title and a new boss in Carlo Ancelotti, a man who has won everything the game has to offer and he will want to add another title to his collection and with the likes of Dries Mertens, Marek Hamsik and Lorenzo Insigne Napoli cannot be ruled out. Likewise, Inter Milan will feel their chances of making a sustained title challenge are strong following their good league campaign last time. Luciano Spalletti has got them back amongst Europe’s elite and they will seize their chance back in the Champions League. However, Spalletti will want them to challenge the league and their transfer business emphasises their intent. Signing the likes of Stefan De Vrij, Kwadwo Asamoah and Radja Nainggolan has got Inter fans dreaming of topping Italy once again. In contrast, Roma have been consistently finishing in the Champions League places but never really threatening Juventus too much however, Eusebio Di Francesco will feel this is their chance to get into the title race this season despite a complete change of their squad. Plenty of outgoings but also plenty of incomings including Justin Kluivert, Bryan Cristante and Javier Pastore. Roma will believe they have a chance of winning the league but there is stiff competition from bitter rivals Lazio. Simeone Inzaghi has been consistently good a Lazio and I’m sure their main focus is to return to the Champions League however, there will be growing belief from the fans and players that Lazio could surprise a few and possibly win the league title but their short-term ambition is the Champions League. Similarly, AC Milan will also be looking for short-term success which is a Champions League return however, Gattuso will feel they can do better than that and potentially upset Juventus’ Italian supremacy but they would be considered firm outsiders. One things for sure, the title race could be one of the most exciting in Serie A history with all the big teams believing they have a chance and it will not be easy for Juventus to continue their league dominance. Excitement is certainly around the corner.

However, both Lazio and AC Milan will have stiff competition from teams below in the race for Champions League and Europa League football. Atalanta, Fiorentina and Sampdoria will challenge the big 6 once again. Atalanta and Giampiero Gasperini have been a match made in heaven. The club has grown from strength to strength and they will delighted with consecutive Europa League campaigns however, they will want to potentially take the next step and break into the top 4 but I think they will comfortably continue to challenge the Europa League places. However, Fiorentina will be desperate to challenge those European places. The viola struggled to sustain a push and fell short last season and certainly the tragic death of Davide Astori united the whole football club as they finished the season strongly under Stefano Pioli and they need to carry that momentum forward into this season and they will hope to break into those European places. Likewise, will Sampdoria, they were excellent during the first half of last season but tailed off during the latter stages of the season and consequently dropped out of the European places. Marco Giampaolo will be hoping Sampdoria will find consistency this season but the loss of top scorer Duvan Zapata is a huge blow and Sampdoria will quickly have to find a way to score more goals this season. Sampdoria will cause problems and they will be hoping their season ends in Europa League football.

Then we come to the mid table sides hoping to avoid the relegation battle while hoping to make their season better than just an average finish. Torino, Sassuolo, Bologna and Genoa will be a handful of sides hoping to surprise their fans this season. Torino have been regular mid table finishers for a long time in Serie A and sure enough last season saw them finish in mid table under Walter Mazzari. However, the Torino fans will be hoping their season springs a surprise such as a top 7 finish or a potential cup win. With the likes of Mbaye Niang, Andrea Belotti, Adem Ljajic and Danielle Baselli it isn’t hard for Torino fans to potentially dream for something exciting to happen this season. They will beat a few teams and they could be the surprise package this season. Bologna will also be hoping for something to happen this season. After narrowly avoiding relegation last season, Bologna have made a change and Filippo Inzaghi is the man tasked with improving the whole club. A mid table finish would represent a good first season, but the club will be looking to do better and finish in the top 10 and potentially challenge for European places but in the short-term an improvement on last season will be a good first season for Inzaghi. In contrast, despite struggling for much of the campaign, Sassuolo finished comfortably clear of relegation and finished mid table which following their previous season was a disappointment however, under the leadership of the highly rated Roberto De Zerbi, Sassuolo fans will be hoping for a much more exciting campaign and they will hope they can challenge for a European place but another consistent mid table finish would represent a good season for the club. It is fair to say Davide Ballardini single handily rescued Genoa last season. They struggled for much of the season but Ballardini saved them and they finished comfortably mid table and this finish once again will represent a good season for the club but a complete change of squad with over 15 incomings and 20 outgoings will concern the Genoa fans because team cohesion will be crucial for any success this season and they will have a fear Genoa will be embroiled in the relegation battle and it could be a difficult season for the club if this huge risk doesn’t pay off.

Improvement is a vital part of any football team and club and certainly Udinese, Chievo and Cagliari will all be hoping for a much-improved season. Udinese were the surprise strugglers last season and just about avoided relegation. Despite Massimo Oddo starting brilliantly, Udinese formed tailed off and they went on a severe winless run which cost him his job, but the change was enough for them to survive and now the club begins to build and go again and new manager Julio Velazquez will be tasked with improving their league position after a disappointing season. Likewise, Lorenzo D’Anna will be hoping to improve Chievo’s last season this time around. After replacing Rolando Maran, D’Anna saved them from relegation and his task will certainly be to improve on an overwhelmingly disappointing season and the fans will be hoping to cheer more than just Hellas Verona’s relegation. Cagliari are also looking for improvement following another scrap for survival. Despite keeping them up, Diego Lopez decided to leave, and Rolando Maran is tasked with improving Cagliari’s league form and position but once again the fans will fear the club is involved in a battle for survival and it could be another nervous season for the Sardinian based club. In contrast, what a phenomenal season it was for SPAL. The club returning after 52 years away from Italy’s top flight and they seized their chance to gain consecutive seasons and certainly Leonardo Semplici has done a magnificent job with the club and their ambition for this season will certainly not change with a 3rd consecutive season high on their agenda and now the permanent acquisitions of loans including Alfred Gomis, Jasmin Kurtic, Bartosz Salamon and Alberto Paloschi SPAL can keep the togetherness of their squad and it could be vital in their battle for survival.
And then we come to the three promoted sides. Parma, Empoli and Frosinone who all secured their places in Serie A after excellent campaigns last time out. Empoli stormed to the Serie B title and their remit will be survival but they will hope to carry that momentum from last season into the new campaign. Aurelio Andreazzoli has done a brilliant job with the club and he will relish in showing his managerial skills in the top league and survival is vital for Empoli as it is for any promoted team. There is no denying Italian football fans will be delighted to see Parma back in their rightful place. After their severe financial problems, the club dropped into Serie D but consecutive promotions have them back in the top flight and survival will represent a successful season however, this could be complicated due to the club starting the campaign with -5 points after a match fixing scandal and the club will belief the team will do enough to immediately get rid of that deficit. Roberto D’Aversa will look to improve his squad and quickly get results because the longer that gap stays at 5 or increases, relegation could be inevitable. Frosinone will also target survival in the new season following an excellent promotion campaign. After 2 years away, they will want to seize their opportunity and sustain their place in Serie A and there will a confidence they can do that, but it will be difficult for them.

Serie A could be an exciting at both ends of the table and there will be plenty of twists and turns during the new campaign, but Juventus will hope domestic success and the signing of Cristiano Ronaldo brings them European glory. The pressure for all clubs will intensify and some will succeed, and some will fail. One things for sure, the 2018/19 season will be one of most intriguing and exciting seasons for a long time. 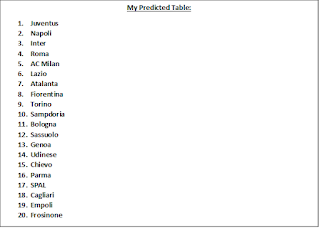 Posted by Matthew Creamer at 13:42