Ligue 1 Could Be Very Interesting This Season

Ligue 1 promises to be another entertaining league this season. France’s top flight is full of talented players and strong football clubs and fans of the French league will hope for a close title race, battle for European places and a tight relegation battle. Defending champions PSG are changing their footballing style and philosophy but will be overwhelming favourites for the title once again and you’d have to be brave to bet against them but the likes off Monaco, Lyon and Marseille will challenge them hard and you never know a surprise could be around the corner.

As previously discussed, PSG have a new manager in the highly rated Thomas Tuchel. Having taken over from Klopp at Dortmund, Tuchel had some success and now he must put all that into PSG. However, it shouldn’t be too difficult with the quality of players like Neymar, Kylian Mbappe, Marco Verratti and Gianluigi Buffon at his disposal. The real ambition is to win the Champions League and Tuchel will be under pressure to deliver this immediate desire. However, they will face severe competition both in Champions League and Ligue 1 and Monaco will run them close once again. Leonardo Jardim has been a brilliant appointment by Monaco and once again he is faced with his best players leaving for bigger clubs including Thomas Lemar and Fabinho. These will be hard to replace but as they proved last season, they will still be competitive and Jardim will be determined to keep Monaco’s good momentum and try to win a second title in charge of the club. However, PSG and Monaco will certainly face competition from a rejuvenated Lyon and Marseille. Bruno Genesio has got an exciting Lyon team with Nabil Fekir the pick of their talented crop and they will cause problems, but they did struggle for consistency last season and Genesio will hope they can sustain a title charge. Similarly, like Genesio, Rudi Garica has done an excellent job at Marseille guiding them to 4th place and a Europa League final in his first full season and their aim will be to return to Europe’s top competition however, they like Lyon, will also feel they can challenge for title and they will need consistency if they are to achieve this. It could be a very interesting title race in Ligue 1 with 4 teams expected to battle it out and it could spring a few surprises.
However, below the top 4 sides, there are another crop of teams hoping to get into the Europa League and possibly dream of the Champions League. Nice certainly fit this bracket and they will head into the new season with a new manager in Patrick Vieira and a loss of key stars Alassane Plea and Jean Michael Seri. While they could struggle to replace them, Vieira will make sure Nice are competitive for the new season and Europa League football will surely be their aim after missing out completely last season. Similarly, St Etienne will also be targeting a return to the European stage. The Green and Whites struggled under Oscar Garcia during the first half of the campaign. However, Jean Louis Gasset revitalised the entire football club and they charged up the league table and a return to Europe will certainly be high on their targets this season. However, one side that did reach the Europa League is Rennes who had a magnificent season and finished in 5th place and Sabri Lamouchi will want Rennes to seize their opportunity in Europe and in domestic terms sustain their place in top 6. There will be an air of excitement in Rennes as their will be in Bordeaux. Gus Poyet came into Bordeaux without anybody really expecting much despite the club having a talented, young side but they managed to secure a place in the Europa League qualifying rounds and that is nothing short of excellent. However, the loss of prized asset Malcom will be a huge blow, but the club will stay strong and be looking out attacking reinforcements to sustain their chance in Europa League and charge the top 3 for a place in the Champions League.

Mid table mediocrity is usually very satisfactory for most clubs and Montpellier are the definition of mid table. Michel Der Zakarian has done a good job in his first season in charge of the club and although they took points of the better teams, they struggled against smaller clubs and consequently missed out on the Europa League and hence finished mid table. However, they will have ambition of returning to the Europa League. Similarly, Nantes also fit this argument and like Montpellier they were in the upper echelons of the table and did take points of the bigger sides but struggles against arguably weaker opposition. However, they head into a new era under the stewardship of the highly rated Miguel Cardoso following Claudio Ranieri’s sacking. Cardoso is ambitious as is Nantes’ owner and they will certainly be targeting a place in the Europa League with a top half finish being the minimal requirement for the season. In contrast, Lille have been a constant side in Ligue 1 for several years and following their takeover last year, it looked like things would improve however, with FFP investigations and a transfer embargo, the club struggled against relegation and just about escaped in the final few weeks of the season. The club will be hoping for a much more comfortable, stable season under Christophe Galtier and he has bulked up his squad while losing assets like Ibrahim Amadou and Yves Bissouma. Continuity will be something the Lille fans will want this season as a top half finish will be their expectation and will be praying they avoid the scrap for survival.
In contrast, other clubs like Dijon and Guingamp will be delighted to still be in France’s top flight. Olivier Dall’Oglio has done an excellent job at Dijon and has plenty of talent at his disposal including Chang-Hoon Kwon and they will hope to keep him at the club because he is at the heart of everything good at Dijon. They will be confident of avoiding the relegation battle and a top half finish will be high on their agenda for the new season. Similarly, Antoine Kombouare has brought an exciting style to Guingamp and so far in his two seasons in charge comfortably made Guingamp competitive and mid table finishers and again this will be their minimum requirement for the season, but the fans will hope the club can challenge further and surprise a few teams by pinching a place in Europe next season. They will dare to dream but mid table would represent another excellent season for the club. Angers will hope for the same in the new season. Angers were very inconsistent during the previous season but when they did find form, they were a difficult team to control and they survived relegation once again and under Stephane Moulin have established themselves as Ligue 1 regulars and keeping that status will represent another successful season for the club.

The battle to avoid relegation will be as intense as ever and there will be a crop of teams hoping to avoid the scrap for survival and certainly Amiens and Strasbourg fit this bracket. Both clubs are gearing up for just their 2nd ever Ligue 1 seasons and the jobs done by both Christophe Pellissier and Thierry Laurey is nothing short of magnificent. Both clubs have talented players and the managers will hope second season syndrome doesn’t kick in because their main aim will surely be survival and anything above that is a pure bonus and a delight for fans. Also, the fans of Toulouse must be sick and tired of battling against relegation because for the past 2 seasons, Toulouse have survived through the relegation play offs and surely, they can’t get lucky for a third time. The fans will expect more this season and will Mickael Dubeve delivers a season where the club isn’t fighting against relegation because mid table will surely be their ambition this season. Finally there is Caen, a small football club who are enjoying each season as it goes by and following the departure of Patrice Granade, they have a new manager in the unknown, unproven Fabian Mercadal who will want to make a statement in Ligue 1 and survival would be an excellent season for the club and anything better such as a mid-table or even top half finish would be nothing short of brilliant for the whole football club.

And finally, there is 2 promoted sides in Nimes and Reims. Both clubs had brilliant seasons securing the automatic promotion places with the latter securing the league title. However, the league will get much tougher for the new boys and both Bernard Blaquart and David Guion will feel survival is a successful season for their respective clubs. Both will need to find a winning formula and some luck along the way if they to achieve their ambitions. Survival will be the main expectation for both clubs and they will be desperate to prolong their stays in France’s top flight. 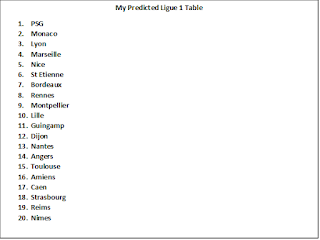 Posted by Matthew Creamer at 20:11